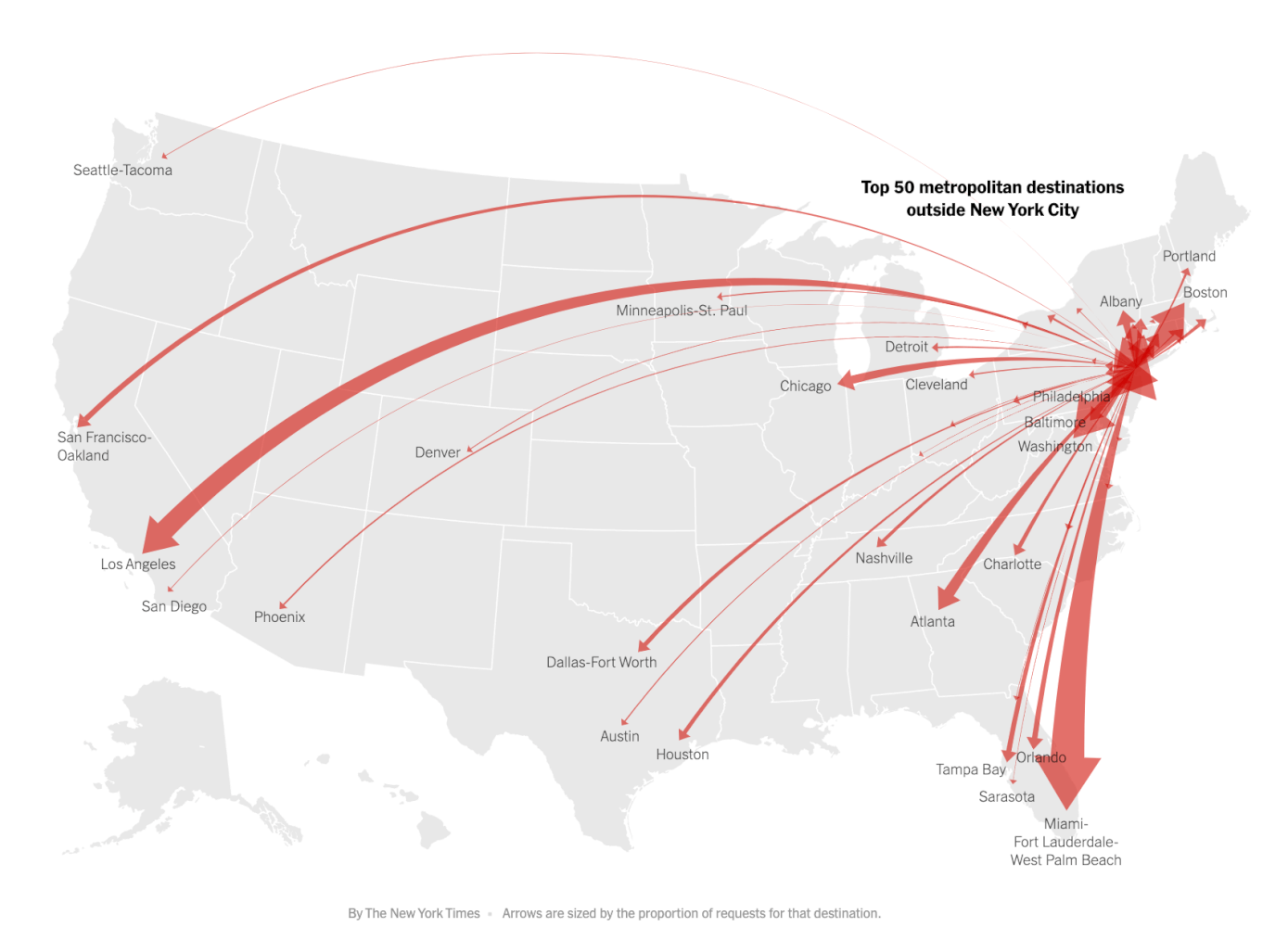 What Does a Migration From New York Mean For Business?

What does a migration from New York mean for business, for investing in Colorado?

In mid-August, Investor and Entrepreneur, James Altucher wrote an opinion blog with the striking title of “NYC is Dead Forever.” Whether this title was click-bait or not, it definitely generated interest. From his fellow New Yorkers, it generated hostility, including from Jerry Seinfeld. Altucher makes a point that the city itself will survive but the idea of New York as the center of fashion, culture, theater, business, and education, will not.  Is Altucher challenging the idea that we need population density in cities like New York to have a healthy economy or business culture?

Where is Everyone Going?

Forbes wrote that in 2018, the NYC area lost 100 people per day for various reasons to other states. It now declares that “the number is closer to 270 per day.” In April of 2020, the United States Post Office received 81,000 mail forwarding requests, 60% of those were outside of the city. The New York Times explained the city’s cell phone data tells analysts “the wealthiest areas saw the most movement” out of New York.

So now what? If people are flocking away from major cities as a way to distance themselves from Covid-19 and remote work is the norm, where are New Yorker’s going?

Outside of the suburbs of NYC, the top destination is Florida according to the New York Times article. Chicago, LA, Seattle, and Denver are also greeting the East Coast arrivals. It’s a good economic indicator for those cities! The economies where more people are moving to are seeing a quicker recovery from Covid-19 than those hemorrhaging people.

There are downsides to being a migratory location. As people move from areas where the cost of living is much higher, New York City for example, they don’t have that sticker shock for homes in places like Denver. Colorado just surpassed $600,000 for an average home price as told by Westword. For those renting in Denver and other Metro areas, this could mean an affordable housing shortage for those looking to buy. This is exacerbated by those moving here who are still employed by their East Coast employer and being paid the same amount.

A quicker economic recovery means that those areas will be better positioned. Less businesses will fail, real estate will remain full, and people will continue to come to the area; the positive economic cycle will continue.

With a more remote workforce, everyone has choices now as to where they want to live. Those coming to Colorado are looking for a less densely populated metro space and an ideal economic environment.

For those interest in angel investing, the Colorado investing network has space for new angels as well as opportunities for investment. The most recent Angel Capital Summit in February, hosted by the Rockies Venture Club, listed three unicorn companies from Colorado as of 2019: Ibotta, Guild Education, and Evercommerce. Every year Rockies Venture Club holds two major conferences for both investors and entrepreneurs leading to 25 investments per year. An established Angel network will attract High-income transplants. We can look forward to new players in the Colorado investment scene.

In 2016, Bloomberg ranked Colorado #8 for most innovative state. It’ll cost you a whopping $50 to file for an LLC in Colorado. Because of this and the population growth, it is an excellent environment for entrepreneurs. There are at least 18 tax incentives from the State for start-ups and small businesses.

Builtincolorado.com lists 12 accelerators and business incubators boosting Colorado startups. Many will recognize Techstars –  a global presence and that got their start in Colorado. Notable graduates from the Boulder chapter include SendGrid, Sphero, and GoSpotCheck. Savvy East Coast entrepreneurs will take advantage of the tax credits, the increasing amount of talent moving here every day, and the angel investor network.

How Can Coloradoans and Colorado Businesses Cash in on Transplants?

An influx of New York immigrants and immigrants in general is great news for Colorado. It creates a dynamic economy. A study conducted in 2018, found that almost 44% of the companies on the 2018 Fortune 500 list were founded by immigrants or their children. While this is specific to those born outside of the United States, New York is a huge hub for immigrants and those networking with them. Coloradoans can cash in on that network and on that entrepreneurial spirit. Jobs can be created by New York entrepreneurs and Colorado business can hire those transplants to create more diversity in their own company.

Networking is an important part of business. Those moving here are also bringing their network of people and their experience. Networks contain knowledge as well as money. High-income earners moving to Colorado might have a few Angel investors in their network looking for the next unicorn.

Final Considerations for Transplants and Coloradoans

Chelsie is the Vice President of Business Development at CFOshare. She helps small business owners improve their accounting and financial planning by surveying their company's needs and aligning solutions internally or through CFOshare's outsourced team.
More posts by Chelsie Kugler

How to protect your small business in a recession

Are you looking to recession-proof your small business? Although no tw...

How to run a successful loss leader strategy

The Wall Street Journal recently reported that Costco has not raised t...

How do I refinance my business debt?

Is your company profitable but wasting money on high debt payments? Do...

Get clarity on your business’s financials. FREE 50-minute consultation.

Pick a Day and Time